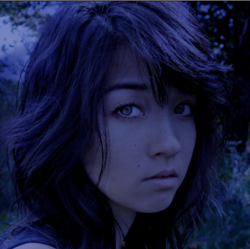 Of average height and slightly above average weight with creamy-tan skin. Her eyes flash light jade and though narrow in shape, are often held open wide as she's watching. Watching. She's clearly of mixed decent and her accent has the tiniest trace of Pacific Islander tones.

Her clothing choices tend to be simple, though varied. It's her make-up and hair that makes a statement--when people remember her.

Anya is quiet and tends to observe more than discuss. She can be quite passionate when she gets on a topic that interests her, but her interests seem rather narrow. Her attention is often divided; she won't always look at you when she's talking or listening to you, but it does not mean that she's not paying attention. She's more likely to stare at you when your attention is elsewhere.

There is certainly an air of naivete and hopeless optimism around her.

Anya was a quiet homebody for much of her freshman year at Wash U., so she did not have many close mortal connections to have to deal with when she had to quit taking day classes. Some may recognize her from her small indie gallery show in the fall of 2016, but to most, she's just that sweet girl who seems a little lost sometimes. She sells kitchy art things on Etsy and is trying to continue her education by taking basic online classes where she does way more than the required two comments on other people's threads each week.

2017 - The start of what should have been her sophomore year of grad school was rough and the turning of the year did little to ease the absence of continuing classes. She's been taking an online class so that she can work on the assignments at night, but she knows it won't last. Plus, she can't teach during the day and her t.a. stipend covers her rent...

So she opened a paint and sip.

Anya does not know the name of her sire, only that she was transient and loved Anya's work.

Amy: "We are fuzzy, Anya, did you hear that?"
Shaper: "Fuzzy, faded, sort of a mix of grey monochromes. Like a Rembrandt that someone spilled turpentine on."
Anya looks sad that she's a fuzzy ruined Rembrandt.

I am so new. Bloggy for Anya at https://behindthemasque.wordpress.com/

And I know she probably should've been Daeva. I chose Mekhet. Sue me. :P

Retrieved from "https://shadowplayinternational.miraheze.org/w/index.php?title=Anya_Brooks&oldid=138"
Categories:
Cookies help us deliver our services. By using our services, you agree to our use of cookies.