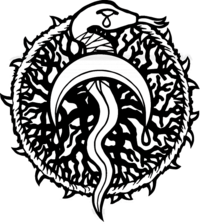 Vampires in other covenants hide their monstrous natures behind veneers of self-control, or hellfire religion, or politesse, or ideological fire. But the vampires of the Circle of the Crone are the howling beasts who roam in bloodstained packs. In other covenants, the dead try to hold fast to religions and ideologies, maintaining hierarchies and rigid systems of control. The Acolytes believe that you must change. Other covenants believe that to be a monster, you must do the will of God, or have a will to power, or study dark secrets. But the Mother’s Army is made of monsters just because it’s the way they are.

They are the attendants at every witches’ coven you’ve imagined, the crazed, naked bacchanals who tear apart the bodies of those who get in their way, who sit like spiders at the centers of orgiastic witch-cults populated by the unwitting and the lonely. Their thinkers and mouthpieces might affect etiquette in some quarters, but have somehow more energy than the theologians of the Sanctified or the boardroom manipulators of the Invictus. They are the ebullient academic occultists and the old-fashioned coven leaders who give the covenant an eloquent, seductive voice.

The members of the Circle of the Crone might call themselves pagan. These are the vampires who see the Curse as anything but — as a blessing bestowed upon the strong, the survivor. They are a part of nature. They are monsters because it is the way of things. And natural creatures evolve and develop. The Ordo Dracul believes that the a vampire should become a different sort of monster. The Sanctified force the Kindred to subjugate their own feelings and afflict humanity. But the Acolytes believe that both beliefs are restraints, and the only way truly to enjoy the bliss of monstrosity is to leave all restraints behind.

Their priestesses and hierophants do not, unlike their Sanctified rivals, impose a structured theology upon their followers and allies. In fact, they’d probably inflict Final Death on anyone who tried to. The Circle is more a convenient banner under which many disparate groups with disparate practices and beliefs can rally in the face of opposition from the more monolithic covenants. Under different circumstances they might be enemies, but these groups recognize their common ground in the face of common opposition. Individually these groups would have been destroyed centuries ago. As the Circle of the Crone, they’ll probably still face destruction — but they’ll take their enemies screaming with them.

The Circle’s component movements range from old to new, from ancient blood-cults to post-modern feminist magick societies. Within the covenant, secrets and magics are shared freely, but outsiders are kept forever in the dark. None of them are human religions, or owes much to human mysticisms; every one is a dark mirror of living superstition. In the few, brief centuries since the Circle’s founding, the Crone’s Acolytes, the self-styled Army of the Bitch-Mother, have created a chaotic, freely contradictory synthesis of belief, and with it, a roughly-defined system of blood-magic that has spread like a virus across the Western world.

The Acolytes cheerfully lead cults, covens, and societies of outcasts and freaks, the human herd from which they choose both their prey and their childer. If the Acolytes seem strange, even by Kindred standards, it is not unrelated to the strangeness of their preferred subjects for the Embrace.

Pages in category "Circle of the Crone CofD"

The following 3 pages are in this category, out of 3 total.

Retrieved from "https://shadowplayinternational.miraheze.org/w/index.php?title=Category:Circle_of_the_Crone_CofD&oldid=4329"
Categories:
Cookies help us deliver our services. By using our services, you agree to our use of cookies.