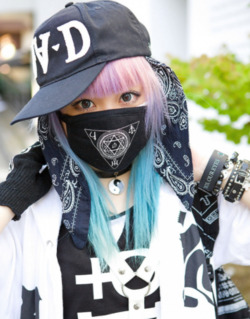 Dark long hair that she often wears up in fancy braids with things woven into the braids (although also randomly wears wigs or dyes her hair varied colors), eyes are green (but often wears odd contacts), 120 odd pounds, 5’3, looks barely 21, has massive scars across the bottom of her face, and across her neck. She is rarely, if ever, seen in public without a mask on at least the bottom half of her face, and her neck is always covered with a scarf or a high collared shirt. When she speaks it surprises people, because it sounds low and gravely, due to the damage to her face and neck. Her brands are across her back, and tattooed over, along with her yakuza tatts, mixed in with Japanese artistry.

Her tatts cover her brands, and are of cherry blossoms, snakes, and water. If you look very carefully, you can see the faint pattern of spiders in the cherry blossoms.

Bubbly, but quiet due to the way her voice sounds, so when she does speak she tends to speak softly. Bright, observant, kind.

From Japan, singer, lives with 'family' on a block where the family owns the entire block. Voice sounds damaged, but makes for a beautiful eerie sound when she sings folk and blues. Daughter of Kaito Minimoto Head of House Minimoto. Mother is diseased, has a single younger brother.

From Japan, moved with a few others to America in late fall of 2017. Her furrier forms have black fur, laced with silver and crossed with wide harsh white scars, and is a type of Japanese werewolf, so doesn't look quite american. Her mother died when her little brother was born. Her father is an alpha in Japan still, and head of the family. She is the only daughter and the eldest child. Before her mother died, she asked her father to keep Ashi out, as much as possible, of much of the seedier parts of the family's business.

Kaito Minimoto is an grizzled old alpha and stormlord in Japan. The Minimoto clans venerates various foxes. The American pack's totem are the twin stone foxes. Her and her father and brother's werewolf forms have traits that look like the Honshu wolf, so look a bit odd to american were wolves, a tad more fox like.

(Speaking of the ink on her back)

"Yakuza sister. We wear our history on our skin. My father is alpha back home....and big boss.... I would have arms done too if I had no walked too public a route to be marked thus openly. As was, had to have back painted over for concerts. Was itchy. Plus spirit brands are in there, marks earned from spirits for doing.... in my case things I am proud of....as for what art means.... snake for my culture is often female...wisdom...Water is change, adaptation, and life...and a joke from my father about my budding stormy...attitudes. As for flowers...is cherry blossoms. Reminder that life is fleeting."

Retrieved from "https://shadowplayinternational.miraheze.org/w/index.php?title=Imported_Pages/Ashi_Mori&oldid=2592"
Categories:
Cookies help us deliver our services. By using our services, you agree to our use of cookies.