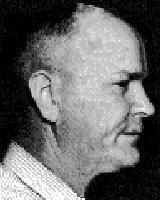 Bowman is Curator of St. Louis, as well as a former Hierarch of the city's Consilium. Fairly mercenary in his dealings, Bowman can often be found consulting with the various other supernatural entities of St. Louis, although rarely without exacting a price.

Before his Awakening, the mage formerly known as David Breton was a professor of anthropology at Saint Louis' Washington University, specializing in comparative mythology. He had a special fondness for the occult, and it would ultimately be his research into this obsession that opened his eyes to the supernal. He managed to uncover a tome he now (half jokingly) refers to as De Vermis Mysteriis. Bowman's still not entirely sure about the contents, but the discovery rather forcefully Awakened him. He prefers not to talk about the experience, as it was traumatic enough to cause a mental breakdown that cost him his position at the University.

For a time, Bowman made ends meet as a private investigator, using skills picked up consulting with the FBI buffered by a copious amount of Pandemonic magic. More recently, his position as Curator of St. Louis has taken enough of his time that he relies on a combination of his magic and influence over SEITR to provide necessary funds.

Tall, thin, and usually seen with a cigarette or beer clutched in his hand, Bowman would be well dressed if it weren't for the fact that he seems to have been wearing the same suit for the past two weeks. His hair is usually unkempt, and he wears about two days worth of stubble at any given time. He has two familiars, Grimbly and Argent. The former takes on the form of a pitch black raven, or occasionally that of a rather stuffy librarian, complete with sweather vest and spectacles. The latter appears as a silver-white fox, or an albino human when masquerading as a mortal.

A crawling mass of shadowy tentacles, accompanied by the sickly sweet smell of rotting meat and a greasy texture. It also carries with it an almost hypnotic sense of dread.

Grumpy, irritable, and generally sarcastic, Bowman is nevertheless fairly outgoing, often to the dismay of the other members of the Night Congress. While prone to thinking the worst of everyone, if one earns his respect Bowman tends to behave much more civilly.

""If you'd like, I can remove [your memory] for you, Emily. It wouldn't hurt, and I can implant a general knowledge of what happened without the painful specifics. On the other hand, we could try something else instead. We could stop him from hurting her. It wouldn't change your memory. You'd still remember what happened. But you'll also remember stopping him from hurting that little girl down there. You'll remember saving her, and you'll remember beating the absolute hell out of the asshole who's hurting her. And that last bit? I can tell you from experience, it feels really fucking good." - To Emily Bradshaw, during a trip to her Oneiros.

"He smells like strawberries." - Emily Bradshaw
"Don't ask this guy to design your house. Your bathroom door will end up sending you to Antarctica or some shit." - Shaper

Remus: “So, young man, what's my little Emily up to these days?”
Bowman: "Staying the fuck away from you, you sick bastard. You're damned lucky the laws keep me from ripping you apart where you sit, or they'd be picking bits of you out of the Great Wall for years."
Remus: “Hahaha, you talk big. I think I understand why poor little Emily likes to hang around you”

Retrieved from "https://shadowplayinternational.miraheze.org/w/index.php?title=Imported_Pages/Bowman&oldid=2167"
Categories:
Cookies help us deliver our services. By using our services, you agree to our use of cookies.