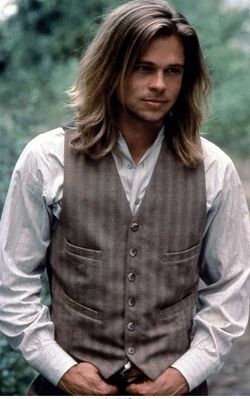 Silas LaFontaine stands around 6'1" and weighs in at about 150 lbs. He's a tall, skinny man. He has a long mane of brown hair, flowing down past his shoulders, almost to mid-back. Sometimes he leaves this down, but is also known to wear it in a bun. His eyes are a bright blue, and he normally wears tinted glasses, ranging from red to brown to black depending on the outfit.

He normally dresses in expensive leather shoes, black or grey slacks, and a button down shirt of any number of colors. The shirt sleeves are normally rolled up, and the top button or two of the shirt is undone. This allows his necklaces and bracelets to be visible, of which he always has a few. He wears at least 2, if not more, bracelets on each wrist, and at least two necklaces.

Silas is quiet and reserved most of the time, choosing to observe more than interact. However, he can be very pleasant and social when needed, or if he has something to gain from the experience. He's polite and well mannered, but can come off a bit aloof sometimes, as he can get lost in his own thoughts in the midst of conversation.

Being new to the city, people don't seem to think much of him yet. He works nights at the public library, and frequents some of the seedier clubs in the city in his downtime, but beyond that he's basically just another somewhat wealthy guy living in the city. Beyond his slightly eccentric look, he tends to blend in fairly well.

Julian (last name unknown) - A Mehket, aligned with the Lancea, who took an interest in Silas while he was teaching at Yale. They grew close, and Julian became jealous of his relationship with Alexis. Spurred by this jealousy, Julian embraced Silas one night, in hopes of keeping Silas as a friend for the ages. However, this plan backfired when Silas learned of the reasons for his embrace and broke ties with him. His current whereabouts are unknown, but Silas has an intense dislike for him now, and hopes to never see him again.

Retrieved from "https://shadowplayinternational.miraheze.org/w/index.php?title=Imported_Pages/Silas_LaFontaine&oldid=2522"
Categories:
Cookies help us deliver our services. By using our services, you agree to our use of cookies.