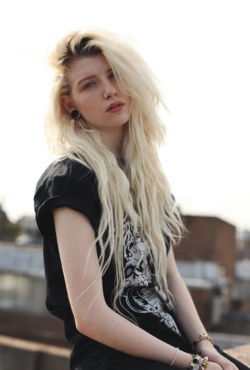 Lee is 4'11.5", but appears slightly taller due to almost always wearing heeled shoes or boots. She has blue eyes, weights around 110, typical pale skinned and looks 18. She is not 18. She generally either looks bored, amused, or sullen. Her back is crisscrossed with old scars, which to those who have seen that kind of thing before, look like a large wolf like animal attack (claws and bites). Often wears a medallion necklace. Started wearing a square cut ruby ring after her birthday.

She tends to cut to the most simple solution (IE punch it, or whatever is most direct). She is driven by boredom, and will often poke at things to see what bubbles to the surface.

Currently owner of two locations of Boire (Pronounced Bwah), one in Missouri and one in Iowa. She is known as fair, but tough, and well liked among those who work nights, due to her willingness to bring a hot drink, or lend a helping hand. The mortals think her strength and speed are due to an obsession with working out, and she is seen doing so a few times a week. Lee is very fast, and good with her fists, preferring brass knuckles to other weapons. She is sometimes seen working event security at various clubs and concerts, as a independent security contractor, known for her efficiency and effectiveness. She has both an Iowa and Missouri liquor license to personally serve and for Boire to serve alcohol. Lee usually owns and rides an odd looking motorcycle. She speaks fluent Russian. For those with the knowledge of such matters, Lee has mob/mafia connections in multiple states, esp the Russians.

Sired by Brandon, mekhet Chicago(?), current whereabouts unknown. Brandon is also of unknown age. Lee does know he was fairly old, and that she was able to control herself much much faster than average new vampires usually can.

"As I said, some traditionalists still do so. Lee is one such..." (Hans) "Are you kidding? Every other word she says is 'fuck'." (Someone in the voice meeting) "Yes, because she's grasping at what modern slang she has available to her. But watch when she gets truly flustered, and it all comes bubbling out in a hopelessly mixed morass. 'I bite my thumb at thee! Curr! Vile motherfucker! Hasta la vista, daddy-o!" (Hans) (incoherent laughter) (everyone) "But the rest of us? We're civilized. After all, we have to live beside the mortals; can you imagine that if they were still our food? And look at what they eat. My god, would you truly like to dine on that? No, we do just fine on substitutes. Near Blood, Blood Beaters... you can't tell the difference." (Hans)

Lee makes a decidedly childish gesture at his back, but carefully gets up and follows. Bowman, "I saw that."

My body's made of fire; black and deep and cold; burning for the choice i made so many years ago; And love will keep me tethered; for my wings are stripped of flight; but into my mad deluded world; they cross the battle lines

Retrieved from "https://shadowplayinternational.miraheze.org/w/index.php?title=Imported_Pages/Velika_Pogreka&oldid=759"
Categories:
Cookies help us deliver our services. By using our services, you agree to our use of cookies.