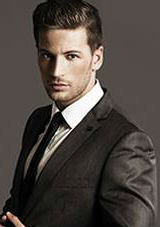 Radev stands a few inches above six feet tall with wavy brown hair and puppy dog brown eyes. He has scruffy facial hair and will occasionally shave his head, beard, or both before a gathering just to break the monotony. He knows it comes back, but sometimes it’s good to have a bit of change.

A peaceful man, Radev prefers to solve things with words than weapons when possible. He is an extremely social individual who enjoys conversing with others, and being the center of attention when he feels like it. He is an intense individual, when speaking or listening he looks directly into others’ eyes…unless he knows they have the Dominate discipline.

Over the last six years he has created and run on online publication called The Sheepdog, which he wishes to eventually extend to print. His passion to unearth and unveil political corruption on both sides has garnered him a measure of fame as a journalist and a high standing amongst others of the profession.

1408 Born Vlastislav Radev in Prague to a poor family

1420 At just 12, fought against Sigismund and the Catholic Church in the 1st anti-Hussite Crusade

1424 Present at Liben for peace treaty

1427 Fought at the Battle of Tachov

1431 3rd of March, present for the Council of Basel

1433 Assisted the Poles against the Teutonic Order.

1439 Defeated at the Battle of Grotniki by Polish royal troops.

1500s Traveled across around Europe and parts of Russia.

1863 Helped the Polish in their uprising against Russia

1864 Does his best to help the Circassian people.

1888 Becomes obsessed with Jack the Ripper, attempts to uncover the truth but fails.

1900 Returns to traveling to be an eternal witness to the atrocities committed by those in power.

1940 Having seen the setup and completion of the first Great War, and the majority of the second he moves to Florida after helping those he can.

1946 Met a man named Diablo on a Florida battlefield. They came away better people.

1964 Arrested in NYC for demonstrating during the Civil Rights Movement

1990 Travels across the United States of America

2011 Returns to using his actual name.

"Such a smart boy" - Richetta Massaro

Old Man Radev needs to be immortalised in song.. so I have.... - Uncle Gadi

Retrieved from "https://shadowplayinternational.miraheze.org/w/index.php?title=Imported_Pages/Vlastislav_Radev&oldid=815"
Categories:
Cookies help us deliver our services. By using our services, you agree to our use of cookies.